The origins of Cowly Owl

Hello, I am Chris O'Shea, founder and single employee of Cowly Owl. I wanted to write this blog post to let you know the story of how the company came to be and some decisions made along the way.

I am an artist/designer/inventor of playful installations, based in London.  I wrote this on my site:

"I use technology to make the unimaginable come to life. Inventing new approaches that explore play, human behaviour and engagement through interaction design and the visual arts. My mission is to create installations, digital toys, play spaces and experiences for everyone, that take us out of the everyday and fill us with joy and wonder.

My works aim to:
– be immersive and participatory
– stimulate curiosity, allow us to make believe, explore and discover our imaginations
– encourage creativity and our own confidence in self expression
– let us collaborate with others and to become a performer
– allow us think differently about ourselves and others, challenging our existing perspectives
– get us moving our bodies in unusual ways
– make us smile"

I realised that whilst I really enjoy creating installation work in spaces, I also wanted to put my ideas out to a wider audience in the form of products that you could download at home.

In October 2010 I relaunched my personal portfolio website, with a section for digital toys, saying "Taking the same values and ideas I have for playful experiences, and making them for a distributed audience. Aimed at mobile and home entertainment systems". 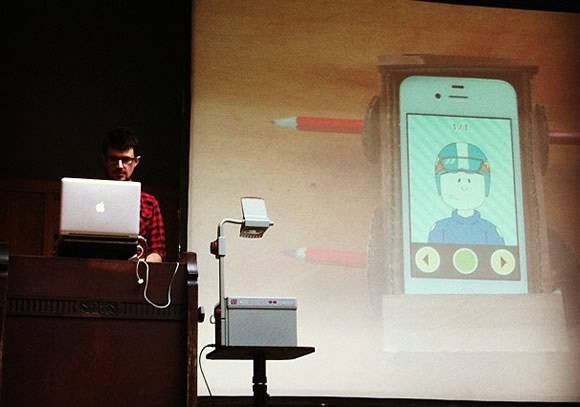 In 2011 after finishing some big screen games for London 2012, I started working on the toy car app Makego.  I showed the work for the first time at the Playful conference in October 2011, the app was released in February 2012 (more on that another time).

At the end of March 2012, after the launch of Makego, I was at a Smartphone and Tablet Conference organised by TIGA (independent games developers association). On this day I felt motivated that this was what I wanted to do for a living.  I decided that to do this long term, I needed to build up a brand that children and parents could remember, rather than publishing apps under my own name.

The next day when discussing this with my wife, she came up with the name Cowly Owl. "vachement chouette" is a French saying meaning something is "really cool" or "really nice", a little bit old fashioned, perhaps mostly used by children. Vache also means cow and chouette means owl, so translated vachement chouette is a cow-like owl, in this case Cowly Owl.

I announced the startup via Twitter on 13th April and put up a holding page, then started working on Little Digits.

I had two main ideas for the logo. The first one to have really simple big eyes and a beak facing you.  The second having a cow-like owl, an owl with cow spots and cow tail, sat in a tree facing towards the moon.  In the end I decided to go with the former, as it felt friendlier, more approachable.

After playing with colours to find those that I thought would fit the brand, I created various iterations of the logo, changing minor details such as eye positioning, beak size, trying to avoid the crazy cross-eyed owl look to find a balance of a young owl but not a baby.  The rough edges to the shapes give them a papercraft cut out feeling, as well as the faint paper texture on the pink and blue parts.

I wanted to the text to look like it was from a typewriter, giving it an old book feel, and offsetting a more serious tone against the cuter owl. The placement and size of the text used in this way to make up the chest of the owl.

I needed an animated ident that would play on promo videos and whenever someone opened an app.  My idea was to have an owl that was in hibernation, would be surprised & woken up by your presence and then read the letters as they appeared beneath. I made a really rough version in Flash to use as a starting point.

Ben Hanbury, designer and animator created the above animation in After Effects. We went through 5 or so iterations to get to the final version. He had the lovely idea to make the logo shape wobble, making it look like a paper stop motion animation. 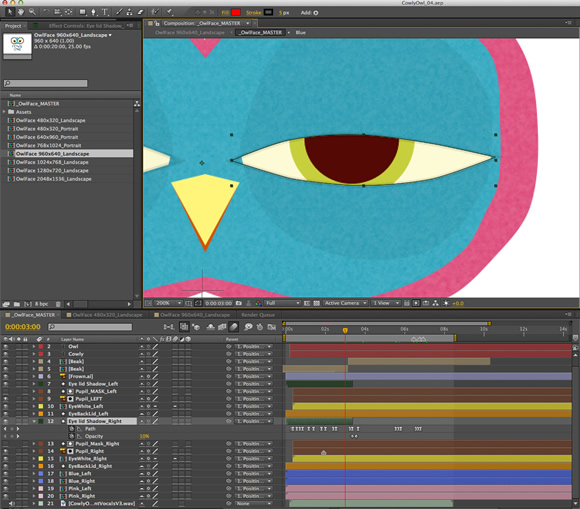 The music was composed by PitStop Productions who regularly do sound work on games. I asked them to make it happy, magical, a classic Disney feel, rather than some hyperactive kids TV shows that you get today.  I wanted it to have an English, classic, countryside, curiosity, story telling feel. A 4 year old girl provided her voice for the ident (and Little Digits).

I'm really happy with how it turned out, so a big thank you to Ben and Pitstop.

I am now working on the next app, hopefully due out in the summer.